We were delighted to link with British Metropolitan Academy to host an Inspiring the Future event as part of National Apprenticeship week.  Supported by Bristol City Council and the Deputy Mayor, Councillor Asher Craig, it was designed to introduce more than 300 students to the opportunities available as an apprentice in the Bristol area and was held as part of the Apprenticeship Support and Knowledge for Schools (ASK) programme, which we deliver in the South of England.

The event took place in two parts to cater to as many students as possible from Bristol Metropolitan Academy and Bristol Brunel Academy.   Deputy Mayor, Councillor Asher Craig started the day with a key note speech followed by a presentation about apprenticeships by Education and Employers via the Apprenticeship Support and Knowledge for Schools (ASK) project. 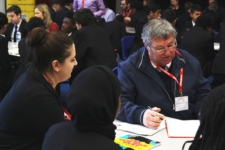 Thirty volunteers from Inspiring the Future and the South West YAAN gave up their Friday to talk to the Year 10 students about their experiences with apprenticeships, in the format of speed networking.  They represented organisations as diverse as Bristol City Council, the Crown Prosecution Service, Marriott Hotels, Homeserve, DAC Beachcroft LLP, North Bristol NHS Trust and Roman Baths.

We were delighted with the feedback from students:

Tim Holmes, Careers Lead at the Cabot Learning Federation – whose two schools benefitted from the event.   ‘Bristol Metropolitan Academy was delighted to host the ASK Inspiring the Future Apprenticeship roadshow during National Careers and Apprenticeship week. It was an excellent event bringing together a diverse and engaging work force to share the important messages about apprenticeships. The Cabot Learning Federation takes seriously the guidance in the Baker Clause and I know our Year 10 students have learnt much from today, brilliant to see students from our sister academy Bristol Brunel Academy also. On behalf of 300 students, thank you to the ASK team for putting on such an excellent event’.

Charlotte Thurston, Head of Schools Engagement at Education and Employers, reflected on the day, “it was fantastic to see so many engaged students and volunteers.  We have been working in Bristol since 2016 to deliver the ASK project and have been delighted with how the momentum around apprenticeships as grown in that time.  It is testament to the benefits of taking an apprenticeship that so many current and qualified apprentices were so keen to share their career journey today.”

Bristol was chosen as the destination for this showcase event as it is part of the 5 Cities Project.  Launched last year by the Department for Education, the aim is to promote the take-up of apprenticeships among under-represented groups and those from disadvantaged backgrounds.