A huge thank you to Howes Primary School, Coventry who looked after our twenty volunteers associated with the Department of Digital, Culture, Media and Sport (DCMS) so well today. We were thrilled to welcome Dame Sue Owen, currently Permanent Secretary for the Department (pictured below) in one of her last school focused events before she retires later this year. People from across the Department and their Arm’s Length Bodies supported the event by sharing their career stories with the children. 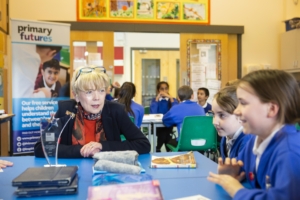 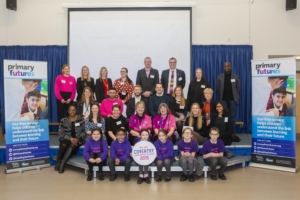 Coventry was chosen as a location as it is currently The European City of Sport and in 2021 it will be the UK City of Culture. Howes Primary School was a perfect choice for the volunteers to visit as it has held smaller Primary Futures events in the past and has been a champion for introducing its pupils to the world of work for a number of years.

Volunteers were drawn from a wide range of different departments and disciplines – from First World War Centenary Commemorations to the head of Media Sponsorship.  The event included a ‘What’s my Line’ assembly where the pupils have to guess the jobs of five volunteers by just asking closed questions. This was then followed by the opportunity t

o speak in more detail to the volunteers in smaller groups.  Pupils conduct a number of different Career Chats allowing them more time to explore the journey the volunteers have taken to reach their current role.

Dame Sue commented, ‘‘It was amazing thinking back to when I was at school, the only careers I knew about were the ones that my mum and dad had. And it was really interesting to hear the kind of questions the children had and their aspirations’.

Nick Chambers, CEO of the charity

who also attended the event explained, “We were delighted that Howes Primary School was able to welcome Dame Sue Owen in one of her last official school events.   The pupils had been well prepared and were really engaged and enthusiastic throughout the whole morning.”

A big thank you to Howes Primary School and all of the volunteers who took part.