‘Well done for bringing this to Northern Ireland”. One of many similar comments from the volunteers at our special launch event for ‘Primary Futures’ in Northern Ireland. Held at Ballysally Primary School, Coleraine on Thursday 21st March 2019, all the children and teachers from the school were introduced to career-related learning. They met an amazing range of more than 40 people from the world of business, science, technology, food, creative arts, engineering, music, retail, sport and innovative entrepreneurs who had travelled from across Northern Ireland especially to visit the school to talk about the world of work.

The visitors shared with the pupils how they use literacy and numeracy in their day-to-day life, encouraging children to think about lessons in the classroom and to make the link between what they can learn and future possibilities. The aim was to broaden children’s horizons, raise their aspirations and challenge the social and gender stereotypes children often have about the people who do certain jobs. The event aims to kick off a national conversation about what more can be done across Northern Ireland to inspire children from an early age. 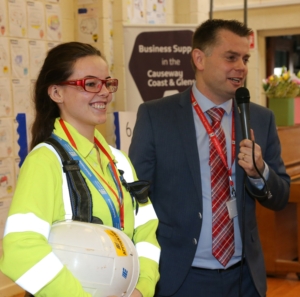 “As a school we continually are seeking to be innovative, creative and inspiring to the children and families in our care.  The future is very much unknown. Research states that 60% of jobs for new our Primary 1 children have not even been thought of! I believe wholeheartedly that children need the necessary skills to be equipped and to be ready for the jobs of the future. However, I also believe that children need to be exposed to the world of work, as new technology gathers pace. To this end, the Primary Futures initiative and concept has greatly enabled us to connect education and the world of work.  We know that the seeds of hope have been planted.’ 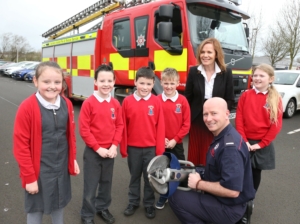 Dr Deirdre Hughes OBE, (pictured above with children and a firefighter from the team who attended the event) international careers expert who grew up in the 1970s in Coleraine brought the event to the school. She recognised an urgent need to find a way of raising children aspirations from an early age and to involve parents, teachers, employers, employees and careers professionals in the process:

“The launch of Primary Futures marks a significant milestone in inspiring children to see the relevance of schooling to the world of work from an early age. International research findings show children’s aspirations are often shaped, moulded and restricted by gender stereotyping, socio-economic background and the role models in their surroundings. In Ballysally there is an urgent need for children and families to have good insights to opportunities beyond the Estate. ” Dr Deirdre Hughes OBE 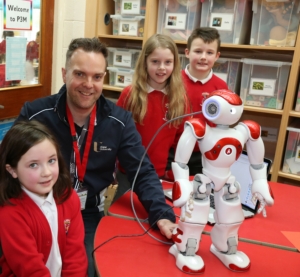 Other comments included, “The assembly was fabulous. The energy in the room was brilliant and as was the engagement with the children”, “A great event, super school, fantastic polite and engaging kids” and finally, “Massive thank you to the school Mr Dunn and the staff. Lovely children. I greatly enjoyed being part of today.” 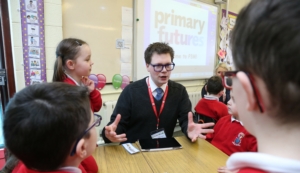 Our CEO Nick Chambers explained the rationale, “We were delighted that Ballysally Primary School was so enthusiastic about hosting our first ever Primary Futures event in Northern Ireland. Research tells how important it is to connect young people to the world of work but seeing it action captures the excitement demonstrated by these pupils as their eyes are opened to the opportunities that could await them.’

In a first for ‘Primary Futures’ a calendar featuring drawings done by the children will be sent into every home on the housing estate with a clear message to parents and carers that children have hopes, dreams and career aspirations that need to be nurtured.

“The Primary Futures event held in Ballysally Primary School was a spell-binding, interactive and inspiring learning experience for everyone involved. With over 40 volunteers from a range of employments, nearly 300 pupils and 40 parents were encouraged to be curious about a vast range of jobs through the ‘What’s My Line game show’ assembly and face-to-face discussions in classrooms.

“Following the event, I had numerous parents tell me not only how much they enjoyed the assembly, but also now that their child wanted to be a… when they grow up. Furthermore, staff commented on how many pupils were now asking more insightful questions linking school work to jobs. A member of Education and Training Inspectorate witnessed the, ‘What’s My Line’ and saw first-hand the impact upon pupils and parents. He told me afterwards that he, ‘had never seen anything like the Primary Futures concept’ but that it, ‘ticked all the right boxes’ in linking school to the world of employment.

“The school along with the local Council are currently creating a calendar of pupil work which showcases pupil aspiration. This calendar will be free for every child in the school and will consist of a number of pupils ‘Drawing the Future’ drawings of what the aspire to be along with inspirational quotes. It is very much hoped that this will be as a means of deepening the thinking already started in Primary Futures event by placing these quotes within each home.”

We are grateful for the support this event have had, especially from the volunteers who were there and the local press.  The Coleraine Chronicle wrote an article that shows the range of volunteers who inspired the children at Ballysally Primary School.  Read this article by clicking here or onto the picture below. 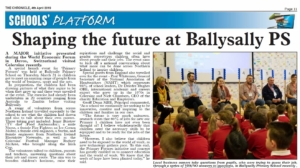