Winners of our Drawing the Future competition received their prizes at an awards ceremony at the British Academy last night and were thrilled to meet career models representing the jobs they drew. 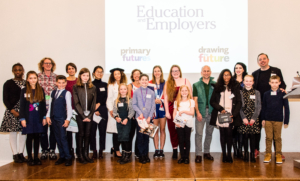 More photos from the event can be viewed here.

Over 13,000 UK primary school children entered the competition with a drawing of the job they want to do when they grow up.

Entries and some additional information from the children were analysed and the findings published in our Drawing the Future report released earlier this year.

“Drawing the Future is a brilliant initiative which is helping young children begin to think about what they want to do in the future, and realise they can do anything if they put their mind to it.

As a dad I want my children to think they can do any job they put their mind to, and as Education Secretary, I want to make sure we widen young people’s horizons so they are aware of the incredible opportunities that are out there.

I want to say a big well done to all the winners and finalists – whether you want to be a vet in a zoo or pilot for the red arrows, I wish you all the very best in making your dreams a reality.”

Awards were presented by judges, Neal, and Ann in front of guests from the world of business, education, and government. The winners were thrilled to be joined by their career heroes on the stage and given the opportunity to chat and ask questions about their jobs.

“This event is the perfect opportunity to congratulate the competition winners but also a chance to reflect on the findings of the Drawing the Future report and to redouble the commitment to raising the aspirations of children from all backgrounds.

We are asking primary schools to sign up to Primary Futures and start using volunteers to help broaden children’s horizons and see the links between what they learn at school and their futures, and we also ask working people to sign up to Inspiring the Future and give a small amount of their time to chat to children in schools about their jobs – and they could be the  inspiration that changes a child’s future”.

The winners and their career role models are:

Caroline who drew a vet in a zoo met Nic Masters, head of veterinary services at London Zoo 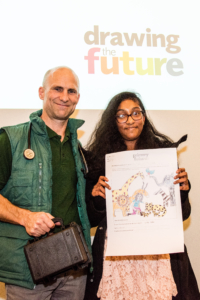 Alex who drew a runner met Stephanie Twell, bronze medallist for 5000m at the 2016 European Championships and competed at the 2016 Olympic Games and Danielle Sanderson. 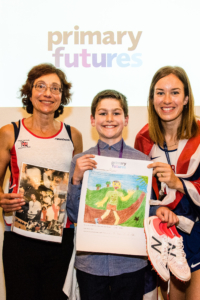 Teni, who drew an author met Neal Layton, award-winning children’s author and illustrator of over 60 books including The Invincible Tony Spears, who is also one of the competition judges. 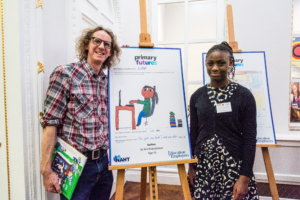 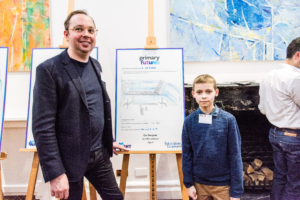 Millie, who drew a pantomime actress met the actor, Danielle Hope, currently starring as Sandy in Grease and former winner of BBC reality TV show Over the Rainbow 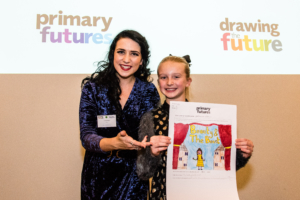 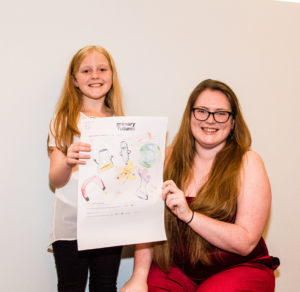 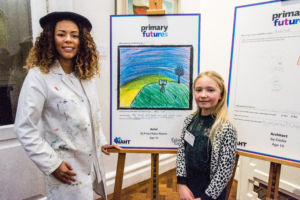 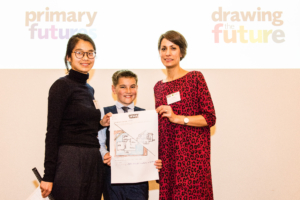 Lucia who drew a pilot for the Red Arrows was, unfortunately, unable to be joined by her career hero as they were training in Morocco but was sent a film inviting her to visit a base soon. 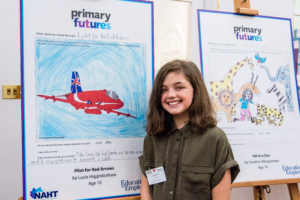 More photos from the event can be viewed here.

Drawing the Future competition and report

The event was a great opportunity to celebrate the talent and creativity of our young winners and runners up but there was a serious point to the competition’s corresponding survey and report.

Many of the survey’s findings brought into stark reality the need to help broaden the horizons of children who from a very early age already begin to make decisions about what they can and can’t be in the future. The report found that:

This has real implications for social mobility, as children from poorer backgrounds may not have successful role models from the world of work and their aspirations are limited as a result.

In addition, it found that career aspirations of children share little in the common with the projected workforce needs – bringing into light the need for more joined-up thinking between the education system and the future needs of the labour market.

The charity, Education and Employers therefore calls on primary schools to sign up to its Primary Futures programme and invite in volunteers to come in to school to talk to children about their jobs and also for people to volunteer just a few hours a year to go